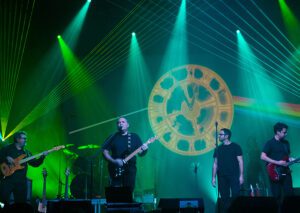 Us and Floyd – Pink Floyd Tribute

Join Us and Floyd in the Planetarium on Friday, November 4, for two dazzling live performances – in sync with two stunning Pink Floyd laser-light shows: The Wall and Dark Side of the Moon.

7:00 pm: The Wall laser show featuring hits from Dark Side of the Moon

9:00 pm: Dark Side of the Moon laser show featuring hits from The Wall

This tribute band strives to perform accurate recreations of the timeless music of Pink Floyd. These nine professional musicians grew up as avid Floyd fans and incorporate their knowledge of the band and its history into every live show. Their collective appreciation for Floyd is evident in the passion and precision of their performances.

Us and Floyd has been playing in New York area music venues and throughout the Northeast for many years. The band has performed at venues that include Mauch Chunk Opera House in Pennsylvania, The Space at Westbury, the Great South Bay Music Festival, New York State Fair, Citifield, and Foxwoods Casino. Visit http://www.usandfloyd.com/ Roman Zavada will perform piano compositions inspired by the spectacular aurora borealis in the Reichert Planetarium Theater on Saturday, November 12, at 5:30 and 7:00 pm. He describes the performance – accompanied by stunning video images on the dome – as a dialogue between a single piano and the northern lights.

With an upright piano anchored to the rock of the Canadian Shield, at the edge of the taiga, Roman Zavada created piano compositions inspired by one of the most spectacular and majestic phenomena on Earth: the aurora borealis of the Northwest Territories.

Acclaimed by critics and audiences alike for its beauty and originality, Résonances Boréales is an exceptional 360-degree dome show featuring Zavada’s piano performance. This immersive experience takes the audience on a journey above the 60th parallel as Zavada translates the spirit of the North in a dialogue between the piano and the pulsing energies of the astonishing northern lights.

Roman Zavada is a self-taught Ukrainian and Québécois-born pianist whose creative direction is based on instinct, spontaneity, and improvisation. His first piano experiences go back to early childhood. As he got older, he quickly developed a passion for showmanship and improvisation while breathing new life into the silver-screen classics of the past and became a silent-film accompanist. He improvised musical narration in real time, which made the musical notes of the soundtrack seem part of the film. He later returned to his personal compositions with an all-new large-scale project: Résonances Boréales.

Inspired by the Northern vibes and the splendor of the aurora borealis, Roman Zavada continued the composition of nine evocative titles over two years. Each piece, based on twenty hours of improvisation in the middle of Prelude Lake’s boreal forest in the Northwest Territories, reflects deeply the sensibility felt beyond the 60th parallel. Résonances Boréales is an album rich in emotion with a strong pianistic and artistic personality. Enjoy a live performance by a string quartet under the stars of the Reichert Planetarium. Talented musicians from Long Island Chamber Music (LICM) will play a selection of pieces composed by Bach, Ravel, Sibelius, and more. Beautiful panoramic views of the stars projected onto the 60-foot planetarium dome will complement the music:

LICM musicians are drawn from Carnegie Hall’s Ensemble Connect, the New York Philharmonic, Boston Symphony Orchestra, Astral Artists, and several other of the country’s most prominent musical institutions. In addition to being leaders in their artform, LICM musicians are teaching artists, entrepreneurs, and socially minded advocates for classical music. The Planetarium is showing seven new laser-light shows – three of them NEW – through December 23:

Laser Pink Floyd, The Wall and Dark Side of the Moon Friday and Saturday in October, 9:00 pm

Take a journey of exploration into the origins of this magnificent and often misunderstood holiday. Travel to the ancient past to uncover the origins of Halloween and learn why we still celebrate this autumn tradition today. Narration by Ray Adell.

Spine-tingling and certainly not for the faint of heart, this program echoes the spirit of the holiday in an enjoyable, intelligent, and often “frightening” planetarium production. Find out for yourself what lurks in the starry skies above. Friday and Saturday in December, 9:00 pm

Season of Light explores the reasons humans are so fascinated with lighting up their lives during the December holiday season. It’s an exploration of the astronomical meanings behind seasonal traditions, including the “Star over Bethlehem”.

This presentation traces the history and development of many of the world’s most endearing holiday customs, all of which involve lighting up the winter season — from the burning Yule log, sparkling Christmas tree lights and candles in windows, to the lighting of luminarias in the American Southwest and the traditional ritual of the Hanukkah menorah.

The show also recounts the historical, religious, and cultural rituals practiced during the time of the winter solstice – Christian, Jewish, Celtic, Nordic, Roman, Irish, Mexican, and Hopi. It also explores light-hearted seasonal traditions: from gift-giving and kissing under the mistletoe, to songs about lords a-leaping and ladies dancing, and the custom of decking the halls with greenery and candles. St. Nicholas, Sinterklaas, Kris Kringle, Father Christmas, and Santa Claus all drop by as well.

Naturally, there is some astronomy in Season of Light. Audiences learn a selection of Northern hemisphere winter constellations and find out why we even have seasons, as we demonstrate the Sun’s path across the sky throughout the year, and the Earth’s tilt and orbit around the Sun. And of course, the program explores the possible astronomical explanations for a “Star over Bethlehem” in the last quarter of the show: comets, meteors, novae and supernovae, and planetary conjunctions.

Season of Light is visually rich, culturally inclusive, musically satisfying, and soothing as a warm drink on a cold winter’s night.